If you’re reading this, you’re using Artificial Intelligence and computing. 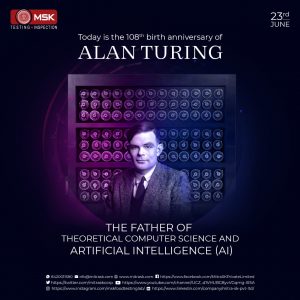 We have been migrating towards a digital world for the last few years, and, in the last three months, we have survived because of it. Life today would be unthinkable without the contribution of the genius called Alan Turing, the father of Artificial Intelligence and of Computing.

Turing had an IQ of 185, placing him in the top 0.01% of mankind. He was also an Olympic-level long-distance runner. It is tragic that he was a fatal victim of the old prejudice against homosexuality. His work with computers and cracking codes saved the Allies two years in winning the Second World War. This polymath was mathematician, computer scientist, logician, cryptanalyst, philosopher, and theoretical biologist – and was more than the sum of all these. He changed the world.

We salute Alan Turing on his birth anniversary, today.