Slagging and fouling are the most common maintenance headaches in coal-fired boilers which can negatively affect efficiency and production. Slag is molten ash and incombustible byproducts that remain following coal combustion. During operations, the ash experiences a range of high temperatures and depending on the ash properties may result in troublesome deposits in different parts of the coal utilization or conversion equipment. The design of this equipment will involve consideration of the melting or softening properties of the coal ash through the temperature range of the process. Since coal ash composition varies considerably, and the properties of the ash vary with composition, the melting properties also vary considerably.

Experimental determinations of melting, and especially of viscosity, are time consuming and expensive. Amongst various methods, measurement of the ash fusion temperature (AFT) gives an indication of the melting and softening behavior of the fuel ash. Although, these temperatures are widely cited in fuel specifications for boilers they have a relatively poor record of correlating with slagging or fouling behavior. Fusion temperatures are measured within a certain time range whereas in the actual case scenario, slagging occurs over a much longer period. Fusion temperature accounts for the behavior of the ash as a whole and slagging occurs at different portions of the boiler with varying chemical compositions related to the ash. Viscosity measurements of molten coal ash and the determination of the critical viscosity temperature is of significant importance in this regard as it can provide a real time scenario of the slagging phenomenon. Unfortunately, such measurements are troublesome and required complex instrumentation which prompts the scientific community to propose various models and simulations which can correlate the AFT data and viscosity of the slag.

It is therefore rational to consider the complex chemistry of the ash itself and therefore the contribution of different chemical parameters such as base to acid ratio; effect of silica, alumina, iron oxides etc. towards the slagging probability of the fuel ash is of justified importance. Considering the influence of ash chemistry on the fusion temperature and the slagging behavior, we have used some widely used correlative equations to assess the fusion temperature, theoretical prediction of critical viscosity temperature and the deposition characteristics of a series of coal ashes.

The correlation between the coal ash composition and the fusion temperature (FT) can be drawn by some widely used correlative equations (1-4).

Coals can be classified as good or poor based on their silica modulus.For a coal to have good slugging behavior this value has to be more than 86.

On the other hand the ratio of the basic oxides to their acidic counterparts has to be below 0.11 for a coal to have low tendency to form slag. Slagging index of a coal should not exceed 0.6. Higher indices indicate greater tendency to form slag. Equation 4 proposed by Gray and Moore considers an index depending upon the initial deformation temperature and hemispherical temperature obtained from AFT measurements that classifies the coal ash as medium high and hard on the basis of Fs values. The classification is listed in table 1.

As suggested by the data tabulated in table 2, none of the samples under investigation has silica modulus more than 86. Allthough, most of the samples lie between values of 71 to 83, a few samples show silica modulus as low as 25 indicating high slagging tendency. As far as the B/A ratios are concerned, only one sample has B/A value less than 0.11 and all the other samples have the values way above the prescribed limit.Consequentially only 10 samples have slagging index lesser than 0.6. It is important to note that S, Ca and Fe2O3 content of the ash play important roles towards the slagging nature. Ideally the theCaO content should lie within 5-40% and Fe2O3 content should be below 6%. On the other hand higher S content increases the possibility of slagging. From table 2, it is evident the samples that has high slagging index contain high amounts of S, CaO and Fe2O3.The Fs values calculated for all the samples are < 851℃ indicating that the ashes fall under the hard category.

Table 2: Ash composition and other parameters

Estimated critical viscosity temperatures based on ash fusion data are reported in Table 3 & 4. Reid and Cohen hypothesized that the Tcv= ST, noting that “the softening temperature is a fair measure of the temperature of critical viscosity, although large unexplained differences can occur.” Sage and McIlroy proposed the use of a relationship based on the hemispherical temperature consistent with the ASTM definition, offset by 200 °F (111°C)

Marshak and Ryzhakov proposed a similar approach, based on the hemispherical temperature (HT) and not theASTM softening temperature (ST):

We observed a positive linear correlation between the fluid temperature (FT) and Tcv, as shown in Figure 1. The R2 value of 0.94 for the reducing atmosphere measurement is remarkably good compared to the existing literature and the R2 value of 0.78 in the oxidizing atmosphere is also inacceptable range. The difference between the correlations can roughly be attributed to the oxidation states of iron in oxidizing and reducing atmospheres. This is consistent with findings reported by Huggins et al., who noted a correlation between FT and the liquidus temperature of a Al2O3-SiO2-basic oxide pseudoternary system. 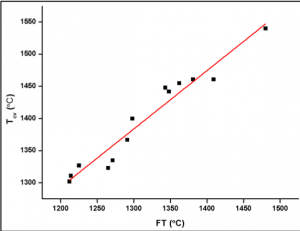 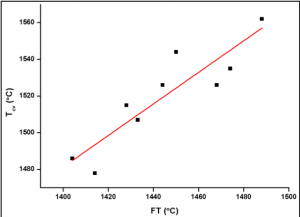 The findings of the work can be summarized as follows. The samples under investigation show high tendency of slag formation suggested by their slagging index, B/A ratio and silica modulus. Moreover we have also tried to predict the critical viscosity temperatures of the ashes by well known correlation equations. We have also considered the function of sulphur in slagging behavior and it is evident from the data that excess sulphur does affect the slagging behavior of the ash. Although the findings corroborate the existing trend obtained from literature survey, further extensive research with a much larger data set is required to properly understand the behavior of the molten ash and the subsequent problems that may arise in coal fired boilers and coal gasification units.

CONTRIBUTED BY DR. ARIJIT GOSWAMI UNDER THE GUIDANCE OF PROFESSOR BARUN KUMAR GUPTA