Wear Metal analysis in lubricants is an essential part of tribological studies. Determination of these metals is a key diagnostic method for oil condition monitoring, equipment condition monitoring and condition-based maintenance programmes. In general, the usual practice is to digest the oils using wet or dry ashing methods followed by analysis using ICP-OES or AAS techniques. Direct solubilisation of the oils in appropriate solvents and subsequent analysis in ICP-OES is often followed to speed up the process which unfortunately involves the use of costly organometallic standards. The conventional dry or wet ashing techniques are tedious, time consuming and often lead to dubious results due to the possibility of contamination. On the other hand, the recent advancement of microwave digestion techniques paves a way towards a faster, cleaner and possibly a better alternative.

In this work presented herein, we have chosen two different lubricant oils of different makes used for two wheelers and four wheelers respectively. The samples of fresh and used lubes are digested using conventional wet ashing, dry ashing and microwave digestion techniques, followed by analysis in ICP-OES towards the estimation of additives such as Zn, Ca, Mg and common wear metals like Fe, Cu and Al. The results are compared to understand the advantage of one method over the others if any and possible justification of the variation in concentration of various analytes at different stages of use is also considered.

Fresh samples of a two-wheeler lube (A) and a four-wheeler lube (B) were obtained from the local market. Samples of the same lubes at different stages of use in a 125 cc four stroke twin cylinder two-wheeler engine and a 1203 cc three-cylinder four valve car engine were collected from their respective service centres. TG analysis and FTIR scans were performed in a Perkin Elmer STA 6000 thermal analyzer and thermo fisher Nicolet is-10 spectrophotometer respectively. Microwave digestions were performed in an Anton Parr Multiwave Go digester and ICP-OES data were obtained from a Perkin Elmer Optima 7000 DV ICP-OES instrument. Ultrapure nitric acid, sulphuric acid and H2O2 all were purchased from commercial sources. Viscosity measurements and Karl Fischer titrations were carried out in an Ostwald’s viscometer and Lab India Karl Fischer titrator respectively at ambient temperature.

2 gm of the sample was placed in a silica crucible and slowly burnt off on a hot plate. Then the crucible was placed in a muffle furnace and heated at 450°C for one hour and at 750°C for 12 hours. The residue was digested with 1 ml concentrated nitric acid and analyzed in ICP-OES.

2 gm of the sample was placed in a silica crucible and 1ml of concentrated sulphuric acid was added to it followed by addition of 1 ml concentrated nitric acid. The resulting mixture was kept on a hot plate until completely dry and then heat treated like that of the dry ashing method. The residue was dissolved in 1 ml nitric acid and analyzed in ICP-OES.

0.5 gm of sample was placed in a microwave vessel followed by careful addition of 1 ml concentrated nitric acid and 1 ml 40% H2O2. The mixture was digested in a microwave digester for one hour at 200  and extracted with 5% nitric acid. The extract was further analyzed in ICP-OES.

The lubes were characterized using TGA, FTIR and viscosity measurements. TGA studies showed that both the fresh lubes were stable up to ~230°C and degradation was completed within a temperature range of 250°C-400°C which is consistent with the specification of quality motor oils. Analysis of the used lube samples returned the same thermal degradation behaviour indicating proper heat management of the engines.

Table 1: Moisture content and viscosity of the lubes at various stages of use.

FTIR scans for the lubes were performed in ATR mode. The FTIR spectrum of both the fresh lubes A and B show a small characteristic peak around 880 cm-1 confirming the presence of glycol as an anti-freeze. There is also a broad peak present around ~ 3400 cm-1 in both the lubes in fresh and used conditions which may be attributed to the presence of moisture, although the FTIR data is not conclusive enough for the identification of water in presence of glycol. For that purpose, Karl Fisher test was performed with all the samples and the results are tabulated in table 1.

Nitrogen oxides are mainly observed in engines which recirculate exhaust gas and absence of sulphate materials which may be introduced from the base oil indicates the excellent quality of both the engine oils.

Viscosity measurements were carried out in an Ostwald’s viscometer. Results are tabulated in table 1. It is evident from the data that with increasing mileage both the lubes become less viscous due to repeated exposure to heat from the engine and subsequent breakage of hydrocarbon chains.

Karl fisher analysis was performed to estimate the moisture content of the lubes. Moisture levels were slightly higher in used oils which may be attributed to the fact of repeated heating and cooling cycles as well as the sampling process. Moisture content was found to be stabilised with increasing mileage. At 2500 km lube A shows higher accumulation of moisture indicating needs of replacement.

Table 2: Parameters of interest in FTIR

Estimation of wear metals and additives:

Estimation of wear metals and additives were carried out using three different digestion methods in ICP-OES. The comparative data is tabulated in table 3 showing the results of conventional wet and dry ashing and newly introduced microwave digestion method.

Ca, Zn and Mg are added in modern day engine oils as anti corrosion additives and detergents. ICP-OES data show the amounts of these additives present in both lubes are in good agreement with the industrial norms. In both the lubes, with increasing mileage; amount of Ca, Zn and Mg have decreased in a regular basis and after a certain distance the concentration of these metals have slightly increased. The initial drop in the concentration indicates the formation of the protective layer by these additives on the surface of the engine components whereas the subsequent increase is indicative of the surface saturation.

Compared to the additives, the wear metals such as Fe, Al and Cu show a reversal of trend with increasing use. As expected, with increasing mileage engine, wear takes place that introduces more of these metals in the used lubricants. Though the concentrations of Fe and Al have increased steadily, there is a drop in the Cu concentration in case of A at 2500 Km.

Table 3: Metal contents in lubricant oils at different stages of use. 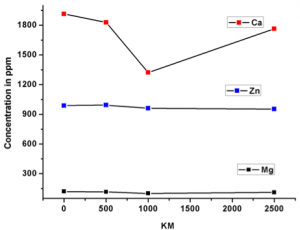 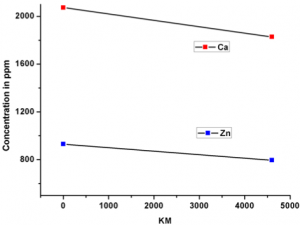 Copper is used in engine components as a heat exchanger. Initially some engine oil components can dissolve some of the copper from a new engine or an oil change can also bring some of the copper into solution that ultimately shows up in the analysis. After the oil settles down, the Iron introduced into the oil being more electropositive, deposits the copper and consequentially the copper level drops off immediately. As expected, the presence of Fe and Al in both the lubes is on a steady rise with increasing mileage as these two metals are primary components of automobile engines.

When compared, each of the digestion methods has a specific set of advantages and demerits. Conventional wet ashing and dry ashing methods are time consuming and sensitive to some analytes with high volatility such as Ni. As suggested by literature survey, open air digestion and muffling of the samples increases the probability of contamination, spillage due to foaming in presence of nitric acid and leaching and/or adsorption caused by the silica/porcelain crucibles. The evidence of contamination is observed in both the lubes when digested in wet or dry ashing method. In both the cases the fresh oils show the presence of Fe, Cu and Al which are absent in microwave digested samples. As fresh engine oils are essentially free from wear metals, the observation can simply be considered as a case of contamination arising from the digestion technique.

On the other hand, microwave digestion technique is fast, precise and free of possibility of contamination. As expected, the fresh oils digested using microwave technique show only the presence of the additives at concentration levels consistent with the conventional methods.

This study includes basic characterization of two different automobile engine oils with FTIR, TG analysis and subsequent estimation of wear metals and additives using various digestion techniques. The amount of additives are found to be as per industry standards for a quality engine oil and the presence of wear metals with increasing mileage was also properly justified. The study provides a comparison between conventional ashing and microwave digestion methods highlighting the probabilities of contamination possible in case of the former. The study provides an insight to engine health, oil replacement schedule and consequential impact on the environment. Although the initial cost of implementing microwave digestion is high along with a possibility of explosions due to mechanical failures, careful monitoring of the method can provide a better alternative to the conventional methods.

CONTRIBUTED BY ARIJIT GOSWAMI AND ATRAYEE SAHA UNDER THE GUIDANCE OF PROF. BARUN KUMAR GUPTA.