Arsenic (Group 15, Atomic Number 33, p-block, Mass 74.922) is an element found in nature, and in man-made products, including some pesticides. Low levels of arsenic are found in soil, water and air. The element is taken up by plants as they grow; this means arsenic makes its way into our food. Arsenic may find in grains, fruits and vegetables according to FDA. Rice is different than other grains — it takes up arsenic more readily from the environment, according to FDA.

The Environmental Protection Agency limits the amount of arsenic in U.S. public drinking water to 10 parts per billion (ppb). Water that comes from privately owned wells may contain higher levels of arsenic, especially in areas where the groundwater flows over arsenic-rich bedrock. World health organization’s (WHO) Guideline Value for arsenic in drinking water is 0.01 mg /L. The maximum permissible limit in India is 0.05 mg/L.

Inorganic arsenic exists in two oxidation states—arsenate, As (V), and arsenite, As (III)—both of which are anions. Although both forms are toxic, arsenite is much more toxic and is also very soluble and mobile in water environments. Arsenic and all of its compounds are poisonous in nature. Organic arsenic is mainly found in seafood.

Arsenopyrite (FeAsS) is the most common As-bearing sulphide mineral. Under oxidising conditions, such as those in mine waste systems, it breaks down to release acids of As and S into the environment, resulting in acid mine drainage with high concentrations of dissolved As. Bengal delta region are rich in these ores. The subsequent migration of this arsenic contaminated groundwater through these deltaic sediments may be one of the principal causes of arsenic poisoning in India and Bangladesh. Bore-well water from arsenic prone regions, water leaching from mines etc are also the main sources of arsenic contamination.

Iron reacts with arsenic anions and can form insoluble and eventually very stable Fe-As complexes that remove arsenic from water. In fact, amorphous Fe oxide is commonly used by water utilities to decontaminate drinking water. Another possible means of treating As-contaminated water include the use of natural soil material (as filtering devices) that contain high concentrations of iron minerals such as goethite and hematite, which can adsorb As.

The quantification of species is difficult because the concentrations of different forms in water samples are relatively low compared to the detection limits of the available analytical techniques. Several hyphenated methods used in arsenic speciation analysis, of which different form of arsenic were quantified by the use of HPLC-ICP/MS.

Because of usage of complexity hyphenated system and costly ICP-MS system, a comparative simple method using Ion chromatograph and ICP-OES and IC has been designed in following way.

This method enables simultaneous determination of arsenate (As5+) by suppressed conductivity detection and total arsenic by ICP-OES and substracting (As5+)  from total As,

(As2O3) by dissolving in 100 mL of 100 mM sodium hydroxide (NaOH) (prepared from 50% w/w NaOH. Solution was sonicated for 20 minutes for complete dissolution of salt.

A standard stock solution of arsenate 100 mg/L was prepared from arsenic standard solution 1000mg/L As. 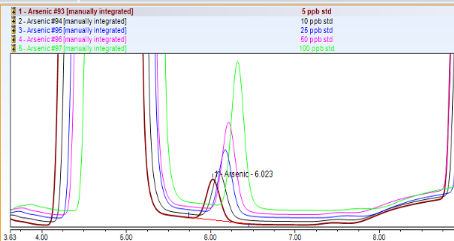 Calibration curve  of As(V) by IC 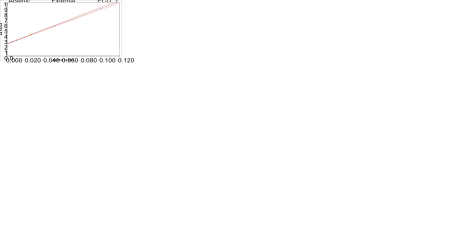 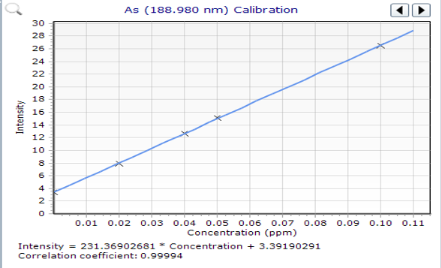 Recovery study was done by using tap water as matrix and fortifying the same at different concentration levels and analysed both by IC and ICP-OES.

All of the general method validation procedure has been followed and found the detection limits was 10.0 μg/L for arsenite and 5.0 μg/L for Arsenate.

Testing range is also determined by liner curve, Accuracy was measured by recovery study and found 80- 126 %.

So, the method can be used to quantify arsenite (As3+) and Arsenate (As5+) with high accuracy, high repeatability, lower detection limit with simple technique using existing infrastructure.