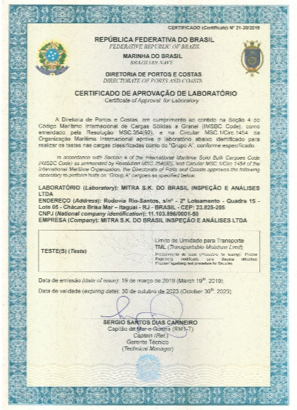 After a long verification and validation process throughout 2018, MSK Brazil got recognition from Brazilian Navy for determining TML of Bauxite cargo with the modified Proctor/ Fagerberg test method. The Certificate Approval number 21-30/2019 is valid for next five years. MSK Brazil became the first independent laboratory in Brazil accredited to perform the test as well as to certify the TML status of bulk Bauxite cargo.

According to IMSBC Code 2018, certain materials (identified as Group A) may have a moisture content to the extent of causing liquefaction of the cargo during maritime transport due to the compacting and vibration effects of the vessel. In case of liquefaction, the stability of the vessel is reduced due to the characteristic mass displacement effects, which can result in its shipwreck.

The cargo transportable moisture limit (TML) corresponds to the maximum permissible moisture content to be considered safe for maritime transportation. One of the methods for the determination of TML is called Proctor/Fagerberg (PF). 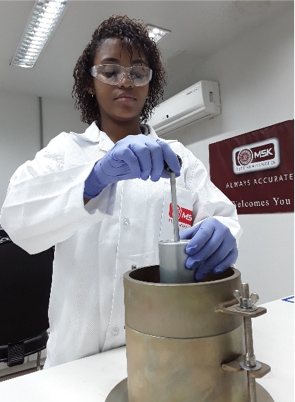 The IMSBC Code 2018 still considers bauxite as belonging to Group C, i.e., not subject to liquefaction. However, in light of the circumstances surrounding the shipwreck of the Bulk Jupiter cargo ship on 01/02/2015, which resulted in the death of 18 crew members, and studies conducted by GBWG (Global Bauxite Working Group), together with other competent authorities, pointed to the risk of bauxite liquefaction. As a result, the CCC (Sub-Committee on Carriage of Cargoes and Containers) of the IMO (International Maritime Organization) published on 20/09/17, the CCC.1 / Circ.2 / Rev.1, in which it considers that bauxite can be classified as belonging to Group A and the new modified Proctor/Fagerberg (PF) test for bauxite. The main difference with regular Group A Proctor/Fagerberg (PF) test is the way sample is prepared, mold size and compaction method.

Having this opportunity, MSK Brazil underwent through long audit process in 2018, on successful completion of which Brazilian Navy has recognized MSK Brazil with the Modified Proctor/Fagerberg test for Bauxite Certificate Approval number 21-30/2019 valid for the next 5 years. Now MSK Brazil becomes the first independent laboratory accredited to perform this test.